In this tutorial, we will learn about SCR Turn ON Methods. There are several SCR Turn On Methods depending various entities like voltage, temperature etc. We will see some of the commonly used methods to turn on SCR.

Before looking at the different ways to turn on an SCR i.e., the different SCR turn ON methods, let us quickly recap some important basics of a Silicon Controlled Rectifier or simply known as SCR. An SCR, which is an important member of the Thyristor family, is a semiconductor device with four layers, three junctions and three terminals. The following image shows the structure and symbol of a typical SCR. 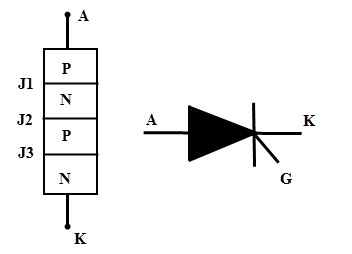 An SCR is essentially a Switch. Unlike Transistor, which can act as a Switch but also as an amplifier, the SCR is only a switch that is either ON or OFF. The SCR has two stable states namely, Forward Blocking State and Forward Conduction State. There are other states but these two are important and hence we will focus only on these two states.

Switching the SCR from forward blocking state (OFF – state) to forward conduction state (ON – state) is known as Turning ON process of SCR. It is also called as triggering.

The criteria for triggering the SCR depends on the several variables like supply voltage, gate current, temperature, etc. There are various methods to trigger the SCR so that it comes into the ON state. Let us discuss some of the SCR Turn On methods in brief. 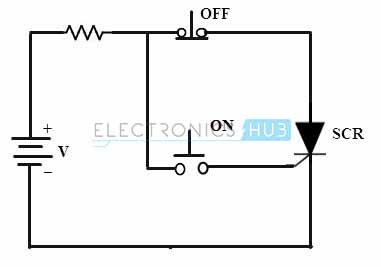 Let us take the above image with structure of SCR as a reference. If the anode (outer ‘p’ region) is made positive with respect to the cathode (outer ‘n’ region), junctions J1 and J3 become forward biased but the junction J2 becomes reverse biased.

NOTE: There is another state known as Reverse Blocking State, where the SCR is reverse biased. The characteristics in this state are similar to that of a regular diode. Let us now focus on bringing the SCR from forward blocking state to forward conduction state by ‘turning on the SCR’.

The SCR can be made to conduct or switched from blocking (non-conducting or OFF) state to Conduction (ON) State by any one of the following methods.

In forward voltage triggering method, the SCR is forward biased i.e., anode is more positive than cathode but this voltage is increased significantly. The gate terminal is kept open.

This voltage is known as Forward Breakover Voltage VBO. At this voltage, the junction J2 becomes forward biased and the SCR turns into conduction state. A large current flows through the SCR (from Anode to Cathode, which is limited by the load resistance) with a very low voltage drop across it.

During the turn ON state, the forward voltage drop across the SCR is in the range of 1 to 1.5 volts and this may be increased with the load current.

In practice this method is not employed because it needs a very large anode to cathode voltage. And also once the voltage is more than the VBO, the SCR turns on and a very high current flows through it instantly, which may cause damage to the SCR. Therefore, most of the cases this type of triggering is avoided. 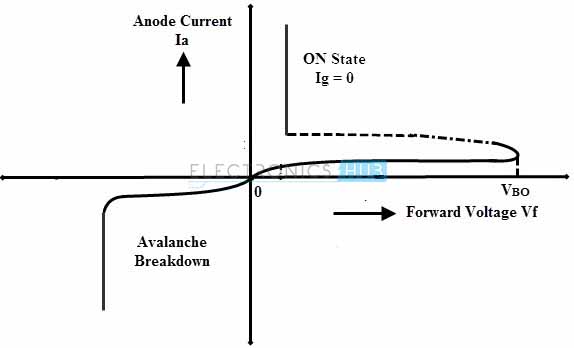 This type of triggering is also known as Thermal Triggering as the SCR is turned by heating it. The reverse leakage current depends on the temperature. If the temperature is increased to a certain value, the number of hole-pairs also increases. This causes to increase the leakage current and further it increases the current gains of the SCR. This starts the regenerative action inside the SCR since the (α1 + α2) value approaches to unity (as the current gains increases).

This triggering occur in some circumstances particularly when it the device temperature is more (also called false triggering). This type of triggering is practically not employed because it causes the thermal runaway and hence the device or SCR may be damaged.

In forward blocking state i.e., anode is more positive than cathode, the junctions J1 and J3 are forward biased and the junction J2 is reverse biased. So, the junction J2 behaves as a capacitor (J1 and J3 as conducting plates with a dielectric J2) due to the space charges in the depletion region.

The charging current of the capacitor is given as:

Using Product Rule of Differentiation, we get

where, IC is the Charging Current

Cj is the Junction Capacitance

Q is the charge

v is the voltage applied across the device

dCj / dt is the rate of change of junction Capacitance

dv / dt is the rate of change of applied voltage

From the above equation, if the rate of change of the applied voltage is large (i.e., it is applied suddenly), then the flow of charging current will increase, which causes the SCR to turn on without any gate voltage.

It is clear that we can turn SCR just by increasing the rate of change of voltage across the device rather than applying a large forward bias voltage (as we did in the previous case). However, this method is also practically avoided because it can cause a false turn ON process and also this can produce very high voltage spikes across the SCR so there will be considerable damage to it.

An SCR turned ON by light radiation is also called as Light Activated SCR (LASCR). Hence, Light Triggering is also known as Radiation Triggering. Generally, this type of triggering is employed in phase controlled converters in HVDC transmission systems.

In this method, light rays with appropriate wavelength and intensity are allowed to strike the junction J2. The bombarded energy particles from the light (neutrons or photons) causes to break electron bonds as as result, new electron – hole pairs are formed in the device.

As the number of charge carriers are increased, there is an instantaneous increase in the flow of current, causing the SCR to turn ON.

NOTE: For successfully turning ON the SCR with the help of light radiation, the rate of change of applied voltage (dv / dt) must be high. 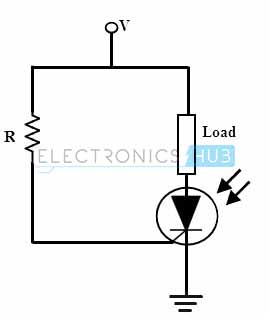 This is most common and most efficient method to turn ON the SCR. When the SCR is forward biased, a sufficient positive voltage at the gate terminal injects some electrons into the junction J2. This results in an increase in the reverse leakage current and hence the breakdown of junction J2 occurs even at a voltage lower than the VBO.

Depending on the size of the SCR, the gate current varies from a few milli-amps to 250 milli-amps or more. If the gate current applied is more, then more electrons are injected into the junction J2 and results to come into the conduction state at much lower applied voltage.

In gate triggering method, a positive voltage applied between the gate and the cathode terminals. We can use three types of gate signals to turn On the SCR. Those are DC signal, AC signal and pulse signal.

In this triggering, a sufficient DC voltage is applied between the gate and cathode terminals in such a way that the gate is made positive with respect to the cathode. The gate current drives the SCR into conduction mode.

In this method, a continuous gate signal (DC Voltage) is applied at the gate and hence it causes internal power dissipation (or more power loss). Another important drawback is there is no isolation between the power and control circuits (as they both are DC).

This is the most commonly used method of turning on the SCR, especially in AC applications. With proper isolation between the power and control circuits (using transformers), the SCR is triggered by the phase-shift AC voltage derived from the main supply. The firing angle is controlled by changing the phase angle of the gate signal. 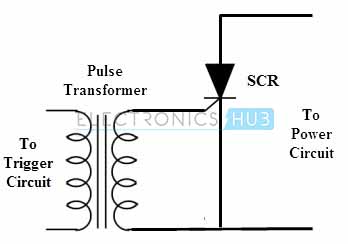 However, only one half of the cycle is available for the gate drive to control the firing angle and for the next half of the cycle, a reverse voltage is applied between the gate and cathode. This is one of the limitation of AC triggering and the other is need for separate step down or pulse transformer to supply the voltage to gate drive from the main supply.

The most popular method of triggering the SCR is the pulse triggering. In this method, gate is supplied with single pulse or a train of high frequency pulses.

The main advantage of this method is that gate drive is discontinuous or doesn’t need continuous pulses to turn the SCR and hence gate losses are reduced in greater amount by applying single or periodically appearing pulses. For isolating the gate drive from the main supply, a pulse transformer is used.

The dynamic processes of the SCR are turn ON and turn OFF processes in which both voltage and currents of an SCR vary with time. The transition from one state to another takes finite time, but doesn’t take place instantaneously.

There will be a finite transition time that SCR takes to reach the forward conduction mode from blocking mode, which is termed as turn ON time (tON) of SCR. The turn ON time of the SCR Ton can be subdivided into three distinct intervals namely delay time td, rise time tr and spread time ts.

Consider the below figure and observe that, until the time td, the SCR is in forward blocking mode, so the anode current is a small leakage current. When the gate signal is applied (at 90 percent of Ig) then the gate current is reached to 0.1 Ia and also correspondingly anode to cathode voltage falls to 0.9 Va.

With the gate signal applied, there will be non-uniform distribution of current over the cathode surface so the current density is much higher at gate terminal. And it rapidly decreases as the distance from gate increases. Hence, the delay time td is the time during which anode current flows in a narrow region where the current density (gate current) is highest.

This is the time taken by the anode current to rise from 10 percent to 90 percent of its final value. Also defined as the time required for the forward blocking voltage to fall from 0.9 Va to 0.1 Va. This rise time is inversely proportional to the gate current and its rate of building up.

Therefore, if high and steep current pulses are applied at the gate, it  can significantly reduce the rise time tr. Also, if the load is inductive, the rise time will be higher and for resistive and capacitive loads it is low.

During this time, turn ON losses in the SCR are high due to large anode current and high anode voltage. This can result in the formation of local hot spots and hence the SCR may be damaged.

Therefore, the total turn ON time tON is: 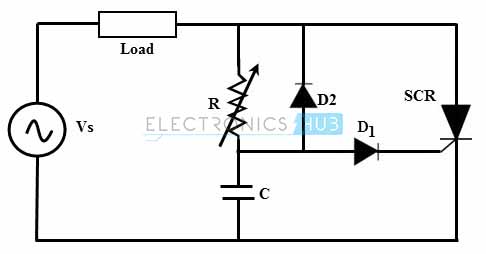 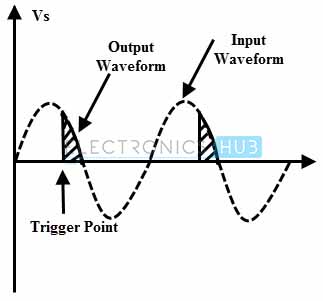 This Is Us Round Table: What Was The Toughest Moment to Hear?