Operational amplifier can be configured to perform calculus operations such as differentiation and integration. In an integrating circuit, the output is the integration of the input voltage with respect to time. A passive integrator is a circuit which does not use any active devices like op-amps or transistors but only passives like resistors and capacitors.

An integrator circuit, which consists of active devices is called an Active Integrator. An active integrator provides a much lower output resistance and higher output voltage than it is possible with a simple RC circuit.

An operational amplifier integrator circuit produces an output voltage which is proportional to the area (amplitude multiplied by time) contained under the waveform.

An ideal op-amp integrator uses a capacitor Cf, connected between the output and the op-amp inverting input terminal, as shown in the figure below. 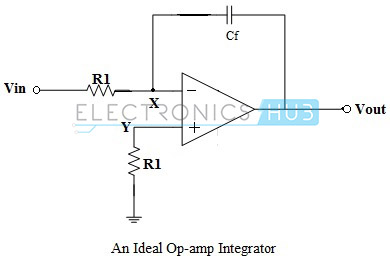 The negative feedback to the inverting input terminal ensures that the node X is held at ground potential (virtual ground). If the input voltage is 0 V, there will be no current through the input resistor R1, and the capacitor is uncharged.

If a constant positive voltage (DC) is applied to the input of the integrating amplifier, the output voltage will fall negative at a linear rate, in an attempt to keep the inverting input terminal at ground potential.

From the circuit, it is seen that node Y is grounded through a compensating resistor R1. Node X will also be at ground potential, due to the virtual ground.

Since the input current to an op-amp is ideally zero, the current flowing through the input resistor, due to Vin, also flows through the capacitor Cf.

From the input side, the current I is given as,

From the output side, the current I is given as,

Equating the above two equations of I, we get,

Integrating both the sides of the above equation, 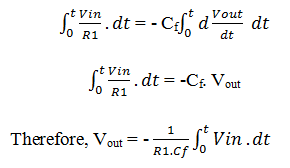 In the above equation, the output is -{1/(R1 * Cf)} times the integral of the input voltage, where the term (R1 * Cf)  is known as the time constant of the integrator.

The negative sign indicates that there is a phase shift of 180o  between input and output, because the input is provided to the inverting input terminal of the op-amp.

The main advantage of an active integrator is the large time constant, which results in the accurate integration of the input signal.

If the step input of the integrating amplifier is replaced by a continuous time square wave, the change in the input signal amplitude charges and discharges the feedback capacitor.

This results in a triangular wave output with a frequency that is dependent on the value of (R1 * Cf), which is referred to as the time constant of the circuit. Such a circuit is commonly called a Ramp Generator.

During the negative half-cycle of the square wave input, the current I is reversed. The capacitor is now linearly charged and produces a positive-going ramp output. 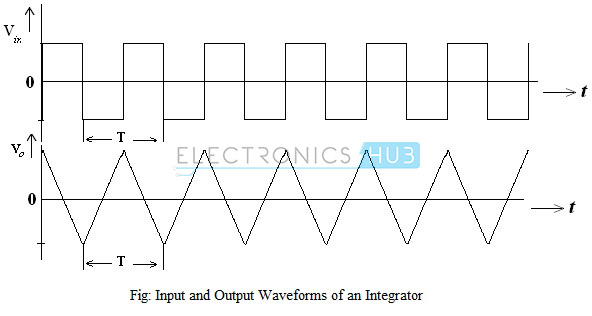 If the Operational Amplifier Integrator is provided with a sine wave input whose frequency is varying, the integrator behaves like a “Low-Pass Filter”, which produces only low frequency signal at the output. All the high frequency signal components are blocked or attenuated.

To avoid the saturation of the output voltage and to provide gain control, a resistor with high value of resistance can be added in parallel with the feedback capacitor Cf.

The closed-loop gain of the integrator will be (R2 / R1), just like a normal inverting amplifier. 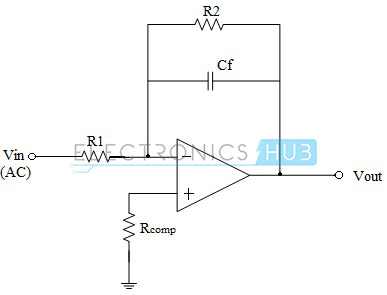 Consequently, at low frequencies of the input signal the circuit behaves normally like an integrator. At high frequencies, the capacitor acts as a short circuit and by-passes the resistor R2.

The capacitor’s reactance in turn reduces the gain of the amplifier. 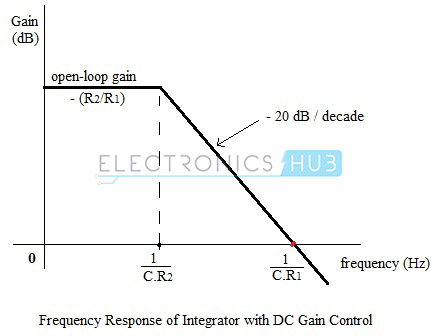 The frequency response of an AC integrating amplifier with DC gain control is as shown in the figure above. At lower frequencies of the input, the capacitor remains uncharged and acts as an open-circuit.

How To Get Free Wifi At Home

How To Block Wifi Signals From Neighbors