What are Arduino Modules?

In simple words, a “Module” in the Arduino environment is a ready to use board with a Sensor or an IO device on it. To use a sensor or a device (like an LCD), you need few additional components.

What an Arduino Module does is it integrates all the necessary components and connections that are required for a sensor (or a device) to work and presents you with a ready-to-use product.

For example, consider a very simple yet very useful module: The Infrared Obstacle Avoidance Sensor Module. It consists of an Infrared Light Source (an IR LED), an Infrared Receiver (a Photo Diode), an Op-Amp, a Potentiometer, couple of passive components and a connector.

The module takes care of the “Sensor” side of the circuit like current limiting resistors, decoupling capacitors, connections, connectors etc., and all you have to do is make the connections to an Arduino board and make an Obstacle Avoidance Robot.

As the first Arduino program you will write is Blinking an LED, let us start with an LED Module. This is a two-colour LED Module, which, as the name suggests, consists of a 3-pin two colour LED. 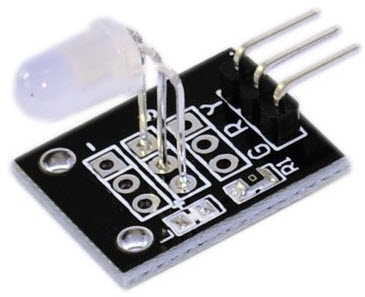 The next logical step after using a Two-Colour LED is to use an RGB LED. An RGB LED Module consists of a 4-pin RGB LED, three current limiting resistors and connectors. 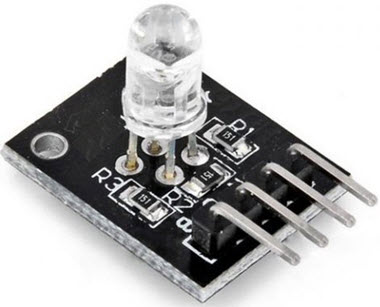 By connecting the Red, Green and Blue LED Pins to PWM pins of Arduino, you can generate several colours. Make sure to purchase an RGB Module with current limiting resistors. If no, you have to add them.

A momentary push button is one of the simplest input devices for Arduino. The Push Button Module consists of a momentary tactile push button and a pull-up (or pull-down) resistor along with the connectors. 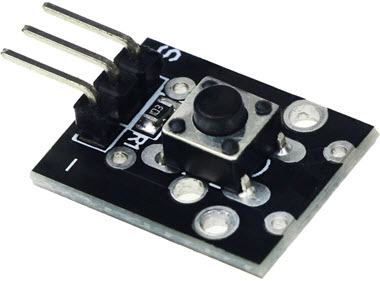 In case the resistor is used as a pull-up, then logic HIGH is detected with button is not pressed and logic LOW is detected when button is pressed. Opposite in case of pull-down.

If you want to easily power the components on your breadboard, then a Breadboard Power Supply Module is the right choice. It provides dual output voltages: 3.3V and 5V on two different power rails. 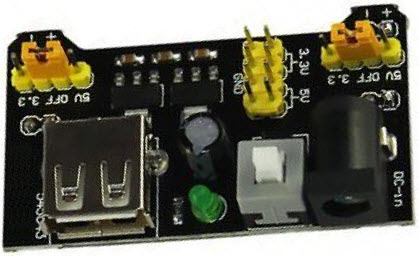 This module will perfectly fit on to 400-point and 800-point breadboards. The input range is 6.5V to 12V. There is also an USB connector, which can output 5V (or accept 5V input).

It consists of an LDR, an Op-Amp (comparator), a potentiometer (to adjust the sensitivity) and a couple of passive components. You can get both the analog voltage as well as the digital signal.

If you want to detect tilt or vibration of an object, then you can use a Tilt Sensor Module. There are two types of tilt sensors: one with a rolling ball and one with Mercury.

As you can see from the image, the tilt sensor module consists of a tilt switch, an op-amp circuit to produce a digital output.

A Reed Switch is a sensor which is normally open but when in the presence of a magnetic field, it closes. You can use a Reed Switch Module to implement a contactless switch control using Arduino.

To provide a digital output, the Reed Switch Module consists of an Op-Amp circuit. 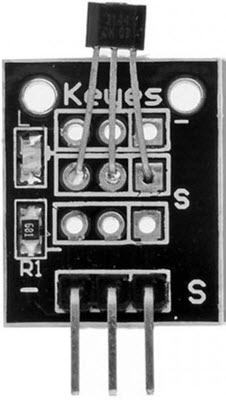 It is available as a simple module with only the Hall Effect Sensor or as a Digital Output Module with an LM393 Comparator.

Passive Infrared Sensor or simply PIR Sensor allows you to detect or sense any motion. A PIR Sensor Module like HC-SR501 is a commonly used modules in Arduino Projects. 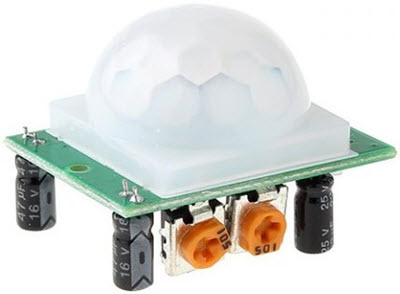 A 360-degree Rotary Encoder Module is an input device which provides both the direction of rotation as well as how much it is rotated. It converts angular movement into digital code. 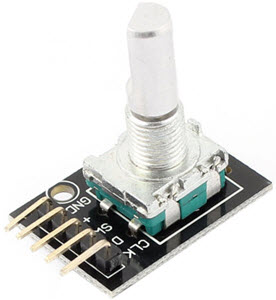 There is also a button under the knob. A Rotary Encoder is a position sensor and generates an output (analog or digital) as per the rotational movement.

If you want to detect the speed of a rotating object, then you can use a Speed Sensor Module. It is based on Infrared Transmitter – Receiver pair (but they are placed facing each other). 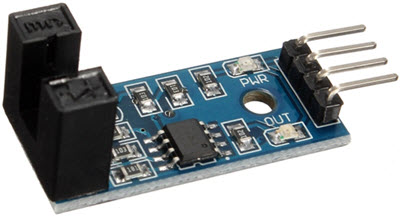 You can place the rotating object like a motor or a wheel in the slot and the sensor will determine the speed in RPM.

The Infrared Flame Detection Sensor Module is used to detect flames in the range of 760 nm to 1100nm. You can design a fire / flame detection application using Arduino.

IR Flame Sensor Module consists of an Infrared Receiver (a phototransistor) and a comparator circuit based on LM393 and produces both digital and analog outputs.

If you want to control the frequency of the tone from the buzzer, then use a Passive Buzzer Module. The output tone is dependent on the input frequency (using a PWM Signal). Usually, tones in the frequency range of 1.5 kHz to 2.5 kHz can be produced. 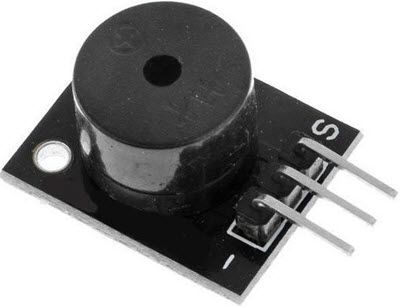 A Microphone based Sound Sensor Module is used to detect voices or loud sounds. Using Arduino and a Microphone Sensor, you can implement applications like Voice Activated Switch or Loudness Detector.

If you want to implement a small and low cast temperature sensor, then a NTC Thermistor is the right choice. The NTC Thermistor Temperature Sensor Module is available as Analog Sensor as well as a Digital Sensor.

A Digital Temperature Sensor is useful as you can easily adjust the sensitivity using the on-board potentiometer. 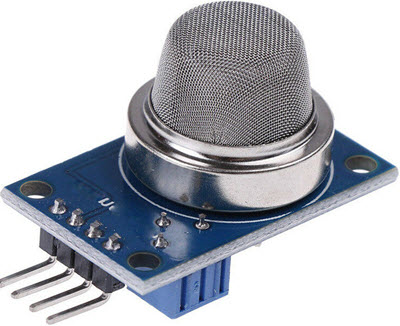 Another popular Modules in the Arduino community is the HC-SR04 Ultrasonic Sensor Module. Using this sensor, you can detect objects up to 4m. The module consists of two Ultrasonic transduces of which one is acting as a transmitter and the other as a receiver. 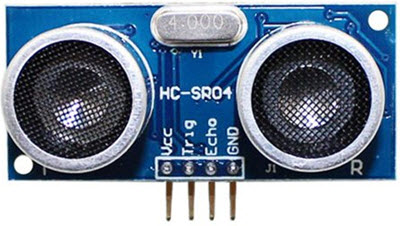 Using DHT11 / DHT22 Humidity and Temperature Sensor Modules, you can easily measure the ambient temperature as well as the relative humidity. Both the Sensors are very similar except that DHT22 has better range and accuracy than DHT11 (so, costly as well). 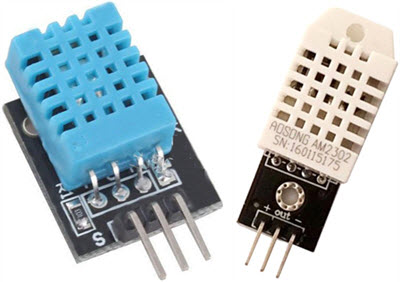 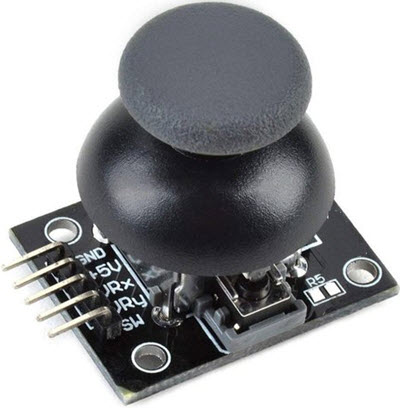 Arduino or any other microcontroller platform is a low-voltage device (usually 3.3V or 5V). But what if you want to control AC Mains devices using Arduino? The easiest answer is a Relay Module. 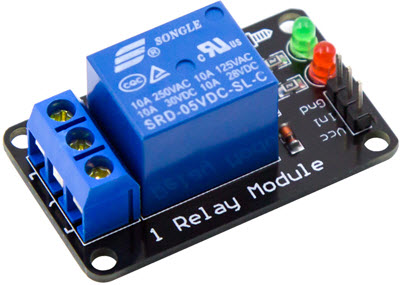 A 5V Relay Module runs on 5V (just like an Arduino), so it can be easily interface with Arduino to control large appliances like bulbs, motors etc. You can get relay modules as 1-channel, 2-channel, 4-channel etc. 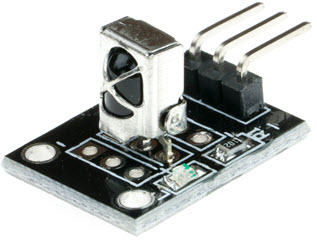 To pair with the IR Receiver Module, you can use the Infrared Transmitter Module. It consists of an IR LED which can transmit 38 kHz modulating signal. Suitable for Arduino based IR Remote Control Projects. 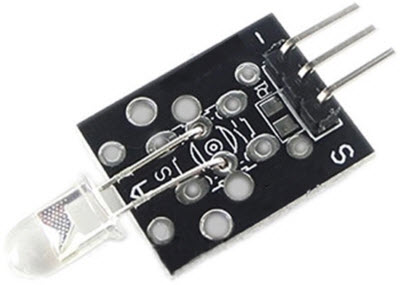 The Laser Transmitter Module consists of a Laser Diode capable of emitting light of 650 nm wavelength. The Laser Diode is surrounded by a copper sleeve and also fitted with a condenser lens. 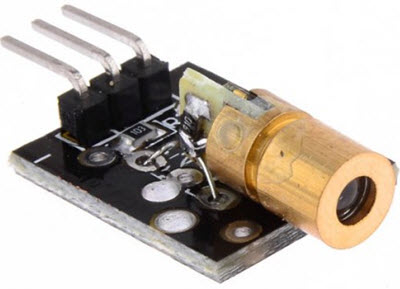 WARNING: Even though this is a low power laser transmitter module, it is very dangerous if the laser beam falls directly on your eyes and can cause permanent eye damage. Use it with extreme caution.

A Knock Sensor Module, as the name suggests, is used to detect Knock or a Vibration. The main sensing element is a conductive vibrating spring enclosed in a housing. 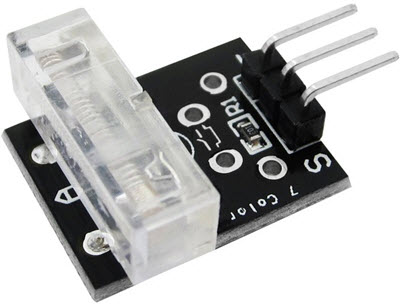 A Soil Moisture Sensor Module consists of capacitive probes and LM393 Voltage Comparator Module. You can measure the volumetric content of water in soil using this module. 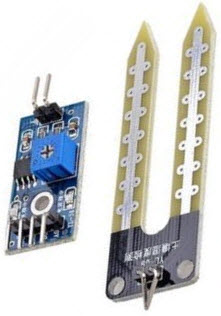 The BMP180 is an old but very useful sensor. It is a Barometric Pressure Sensor which can also measure Temperature and Altitude (based on pressure). It is a tiny module and is a digital sensor. 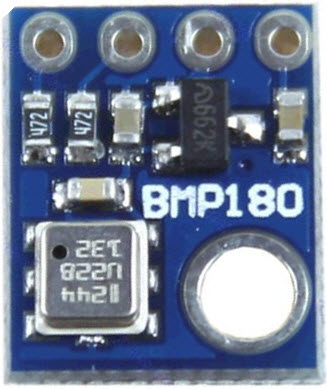 If you want to detect orientation of an object, then the MPU6050 Accelerometer / Gyroscope Module is the best choice. It is a 6-axis motion tracking device (3-axis Accelerometer and 3-axis Gyroscope). 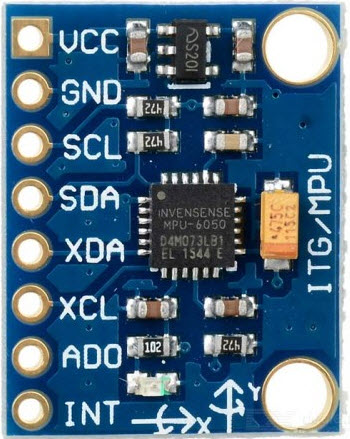 We know that Arduino is a device that runs on 5V logic. But what if you want to interface a sensor or module which runs on 3.3V? The answer is Logic Level Converter Module. 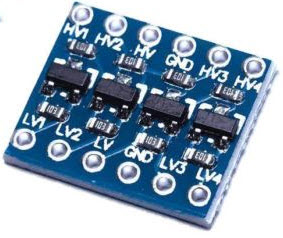 This was a brief list of some of the popular and easy to use Arduino Modules. By no means this list is complete. There are many more sensors and modules available in the Arduino community and I will add more in the future.

The Blacklist Renewed for Season 9

How To Reduce the File Size of PDF