Home » Electronics » In-depth ESP32 PWM Tutorial | How to use PWM in ESP32?
Electronics


In this tutorial, we will learn how to use PWM in ESP32 SoC. Using PWM in ESP32, you can control the brightness of LED, set the position of a Servo Motor and adjust the speed of a DC Motor. This ESP32 PWM Tutorial contains all the important information for configuring PWM in ESP32. 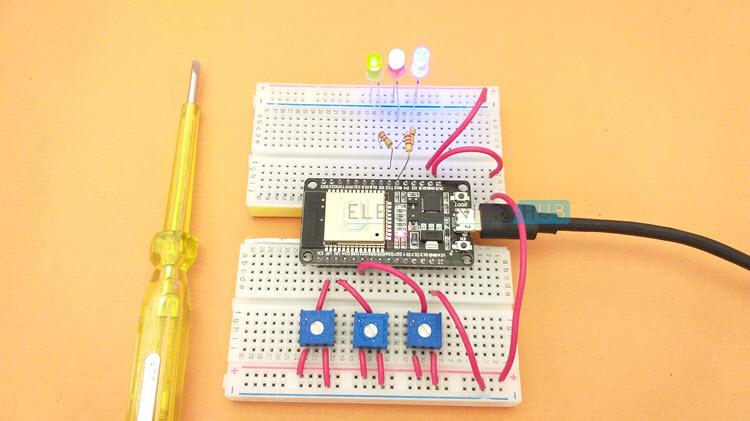 A Brief Note on ESP32 PWM

The ESP32 SoC is fully loaded with very useful peripherals and PWM is one of them. Yes. There is a dedicated hardware block for PWM in the silicon of ESP32. Pulse Width Modulation or PWM in short is an established and widely used techniques for power delivery.

Even though we will be limiting our demonstration of PWM in ESP32 to fading an LED, it is good to know about the Motor Control PWM (MCPWM) block in ESP32, with input capture modules.

If you ever worked with Brushless DC (BLDC) Motors, you will realize the importance of sensing the position of the rotor (using Hall Effect Sensors) for precise speed control.

The LEDC Peripheral of ESP32 consists of 16 PWM Channels capable of generating independent waveforms, mainly for RGB LED Control, but can also be used for other purposes as well.

There are a couple of interesting points about LED PWM Controller in ESP32 that you should be aware of.

Do you remember ‘analogWrite()’ function in Arduino programming? It is the function responsible for generating PWM in Arduino UNO (and other ‘Arduino’ boards).

Since, pretty much every thing in LED PWM of ESP32 is user configurable (channel, resolution and frequency), instead of using ‘analogWrite()’ function, we will be using a different (and dedicated) set of functions to configure PWM in ESP32.

Here is a list of all the LEDC APIs exposed by the driver. These functions are written for Arduino IDE port of ESP32.

Of the 8 functions, we will be focusing on the first three, as they are more useful (and the minimum required) for generating PWM.

Some important points to remember while configuring PWM Channel in ESP32:

With all the necessary information on PWM in ESP32 being laid out, we can now proceed to implementing our first project of fading an LED using ESP32 PWM. It is a very simple project where the brightness of an LED connected to a GPIO Pin of ESP32 will gradually increase and decrease repeatedly.

This project is more about understanding the LEDC functions: ledcSetup, ledcAttachPin and ledcWrite and how to generate PWM in ESP32 than the fading LED itself. 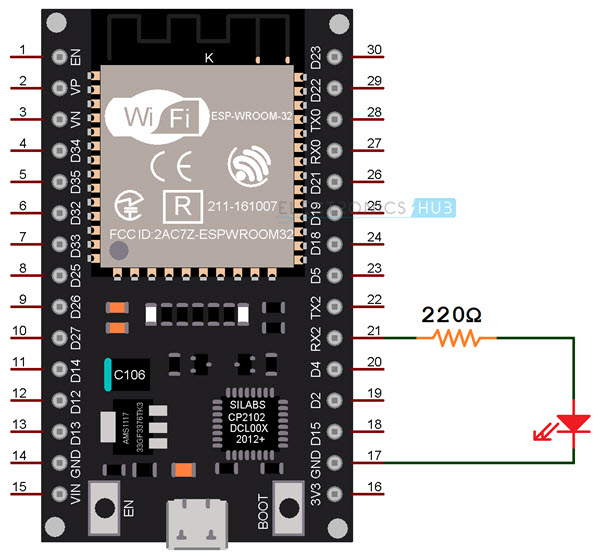 You can use any GPIO Pin to output the PWM Signal. So, I am using GPIO 16, which is also the UART2 RX Pin. Next, we have to setup the LEDC Channel using ‘ledcSetup’ function. The first argument is the channel. Any value between 0 and 15 can be given as channel.

Next argument is the frequency. You can provide any frequency but as a convenience, I will set the frequency as 5 KHz. Also, you have to set the resolution of the PWM. This value must be a number between 1 and 16. I went with 10-bit resolution.

For the rest of the settings, refer to the following code, where I commented the important lines. 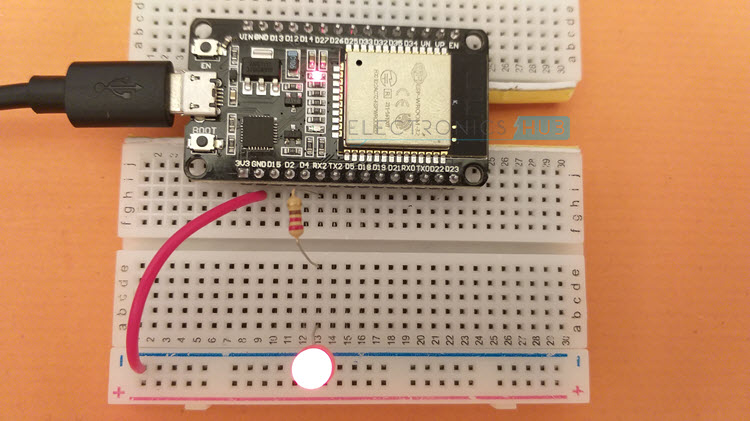 NOTE: You can attach multiple GPIO pins to the same LEDC PWM Channel. If you do so, all the GPIO pins will share the properties of the channel (resolution and frequency).

One of the important features of PWM in ESP32 is all the 16 channels can be configured independently i.e., each channel can have its own resolution and frequency. To demonstrate this, let us make use of the ADC peripheral and adjust the dutycycle of three different LEDC PWM channels independently by turning a potentiometer.

Three 5KΩ Potentiometers are connected to three ADC Input pins of ESP32. Based on the output of the ADC, we will set the dutycycle of three PWM Channels, which are configured with different parameters.

For easy understanding, I connected three LEDs: RED, GREEN and BLUE to three GPIO Pins. These three GPIO Pins are attached to three different LEDC PWM Channels and each channel is initialized with its own frequency and resolution.

Another important point to remember is the resolution of ADC of ESP32 is 12-bit. So, we have to map this to the PWM resolution carefully, to get the full range of control.

The following image shows the connections for adjusting the dutycycle of PWM Channels using ADC (potentiometers). 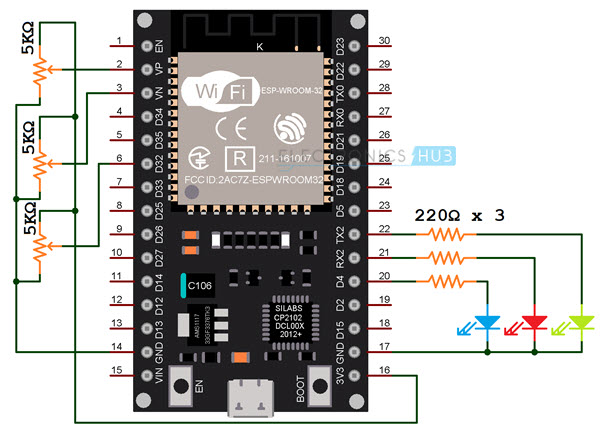 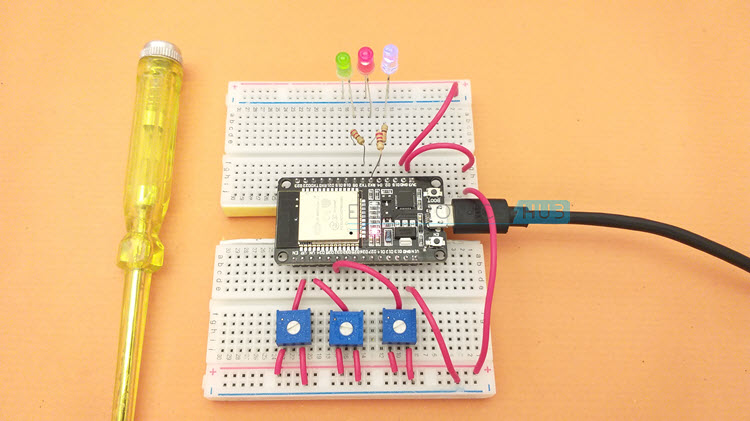 A complete tutorial on ESP32 PWM peripheral. You learned how to use PWM in ESP32 to fade an LED, how to configure the PWM Channel, set the frequency and resolution. You also learned how PWM Channels in ESP32 can be configured independently.

How to Connect Two AirPods to One Phone?

How to Pair Jlab Earbuds?

How to Connect to Scosche Bluetooth?

Can Airpods Get Wet?