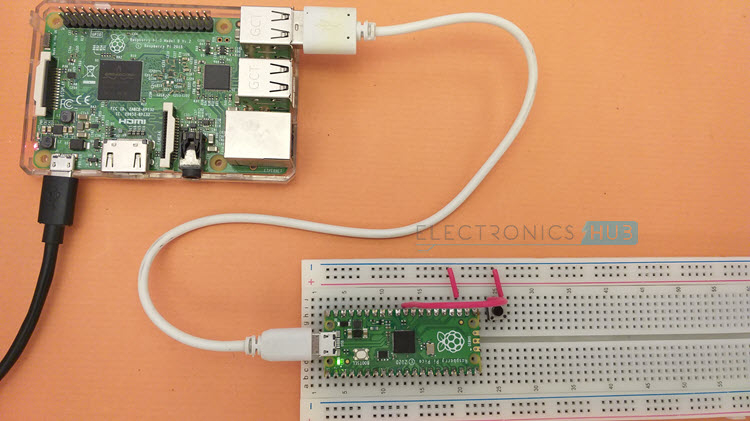 Have You Read These?

These tutorials include some basics about Raspberry Pi Pico, the RP2040 Microcontroller, Pinout of Pico, programming environment, MicroPython and many other important topics.

I strongly recommend you to complete those two tutorials to get familiar with Raspberry Pi Pico.

If you are an old school hardware engineer (like I am) and has experience in writing firmware, then you will probably be more comfortable in C Programming Language rather than Python or MicroPython for writing applications / firmware. Ironically, MicroPython is written in C.

I consider C as the low-level programming among all the high-level programming languages. If you want complete control of the hardware right down to the individual bit of a register, then C is ultimate choice. Hence, C is the preferred choice of programming for many microcontrollers and embedded systems.

The RP2040 Microcontroller based Raspberry Pi Pico is no exception to this. While investing and promoting MicroPython, the Raspberry Pi Foundation also released SDK (Software Development Kit) for C / C++ programming languages to develop applications for RP2040 based boards.

What Computer to use?

I already discussed this in the ‘Programming Pico with MicroPython’ tutorial. You can use any of the Linux, Windows or Mac based systems as the host computer. But the official documentation of Raspberry Pi Pico focuses on Raspberry Pi Computer running Raspberry Pi OS as the main host system (even though it mentions procedures for other systems). 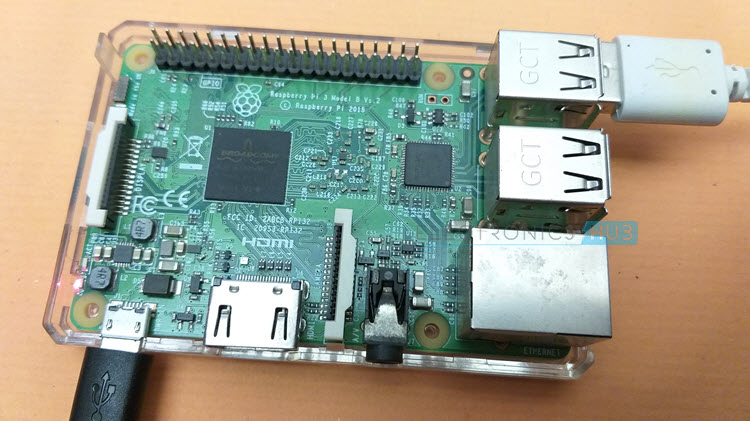 I do not have the latest Raspberry Pi 4 SBC but have an older Raspberry Pi 3 Model B. So, when working with C SDK, I generally use Raspberry Pi to develop applications for Pico. In the future tutorials, I will explain how to work with other systems and environments like Windows, Visual Studio Code and others.

Get Pico’s C SDK and Examples

Assuming you are also using a Raspberry Pi computer, login to Pi using either SSH or VNC (if you connect Pi to a monitor, then well and good). I will be using the VNC viewer to open the desktop of Raspberry Pi.

Open the terminal and create a directory called ‘pico’ at /home/pi/pico. Enter the following commands one after the other. 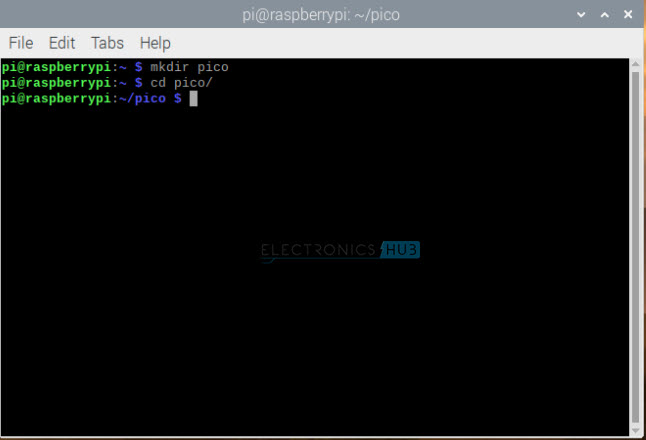 The official repository for Pico’s C SDK is https://github.com/raspberrypi/pico-sdk. Let us clone this repo into our newly created ‘pico’ directory using the following command. 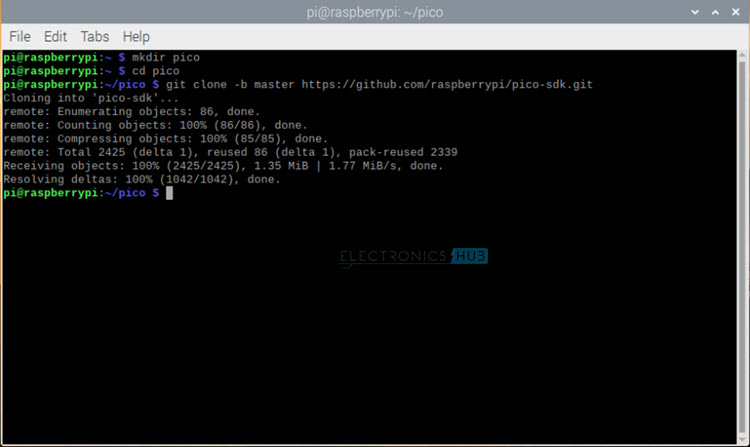 This will create a directory called ‘pico-sdk’ inside the ‘pico’ directory. Before proceeding with downloading the examples, you have to initialize the ‘tinyusb’ submodule in the ‘pico-sdk’ for USB related functions like USB CDC Serial to work.

So, open ‘pico-sdk’ directory and initialize the USB submodule using the following commands. 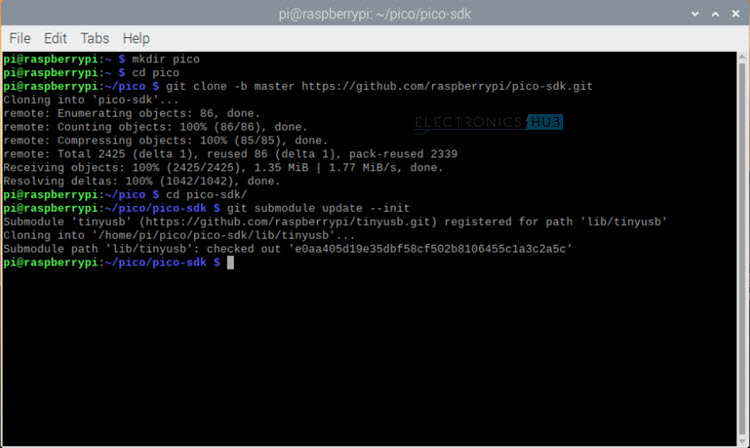 Raspberry Pi Foundation created a bunch of examples for different peripherals like GPIO, ADC, PWM, I2C, SPI etc. of Pico. Instead of writing C programs from scratch, we can make use of these examples to get familiar with different functions and APIs. The official repo of Pico examples is https://github.com/raspberrypi/pico-examples. 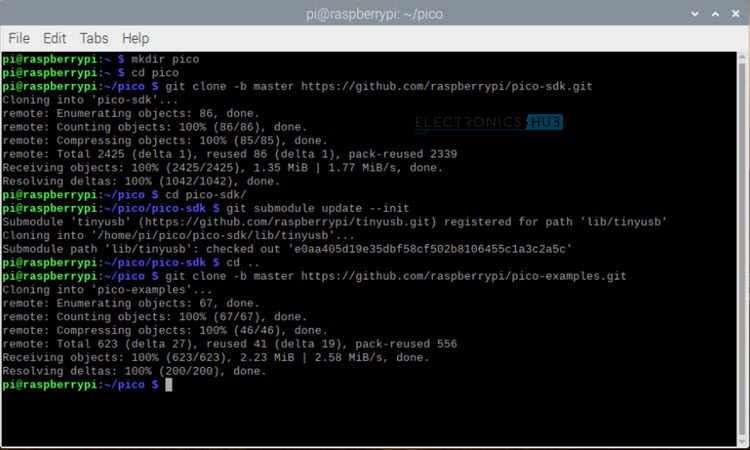 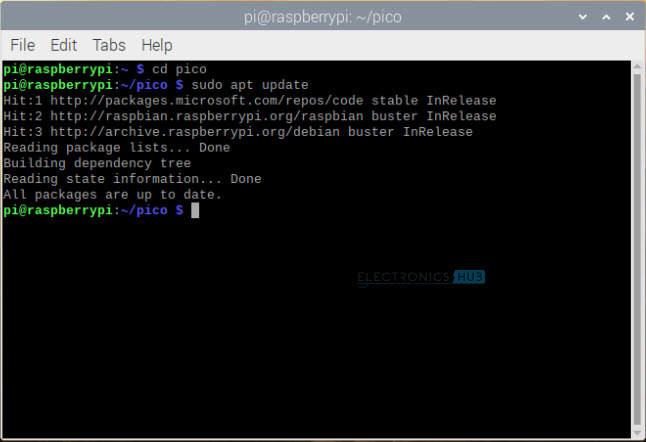 Now, you can install the necessary tools using the following command. If you already have any of these tools installed, ‘apt’ will not install them again.

WARNING: This is a very large installation which occupies approximately 1800 MB of disk space. Make sure you have enough space on the SD Card in which you installed the Raspberry Pi OS. I used a 16 GB card.

Also, it will take quite a bit of time for complete installation. Grab a cup of coffee and relax.

Let us now see the first C example program, which is nothing but the ‘Blink’ program, as expected. Assuming you are still in ‘pico’ directory, open the ‘pico-examples’ directory. This directory contains example for different peripherals and modules. Open ‘blink’ directory. 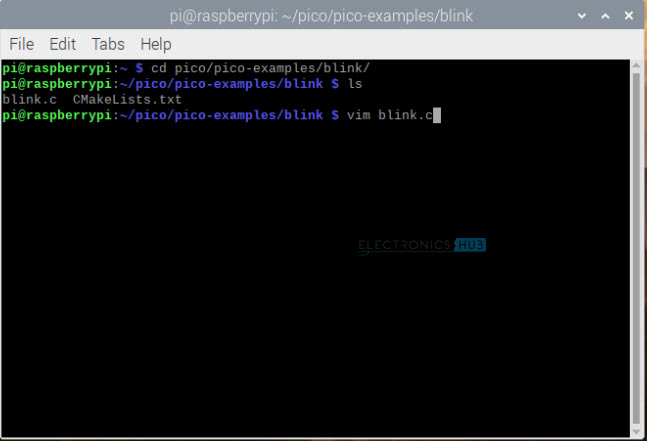 Here, you can see the ‘blink.c’ source code for blinking the on-board LED. If you want to open it, use any editor like ‘vim’. If you don’t have ‘vim’, install it using  sudo apt install vim  command. 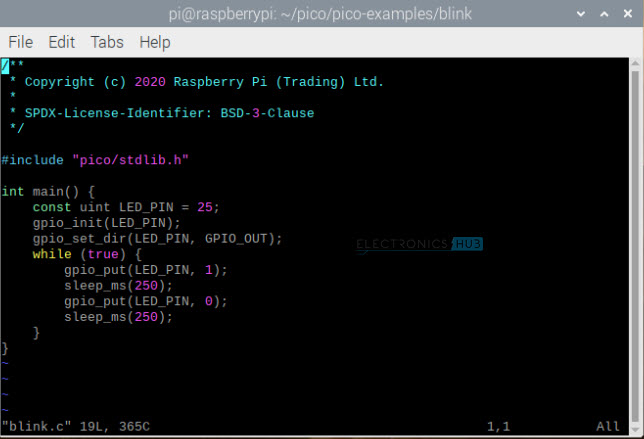 I made a copy of the code and added comments for easy understanding.

We have to now build this source code and generate a binary file.

Go back to ‘pico-examples’ directory and create a new directory called ‘build’. This directory contains all the CMake build files for all the example projects. Open the newly created ‘build’ directory.

Also, export the path for pico-sdk using the following command.

You are now ready to run CMake command to prepare the build directory. 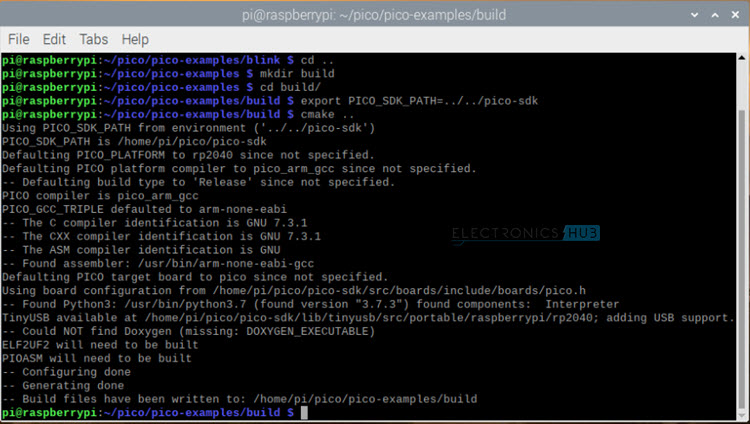 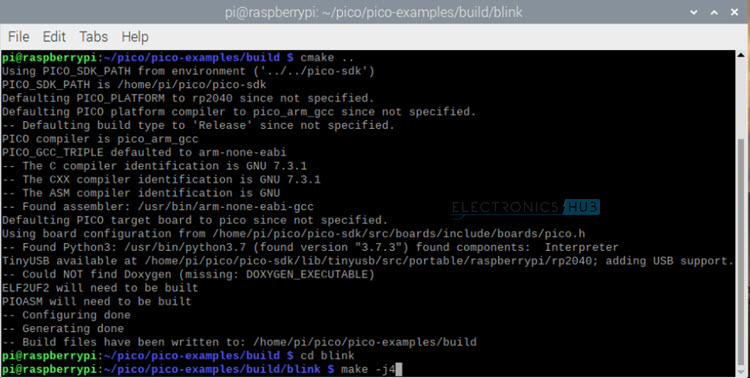 The ‘make’ command will compile all the source files and generates a bunch of binary files. 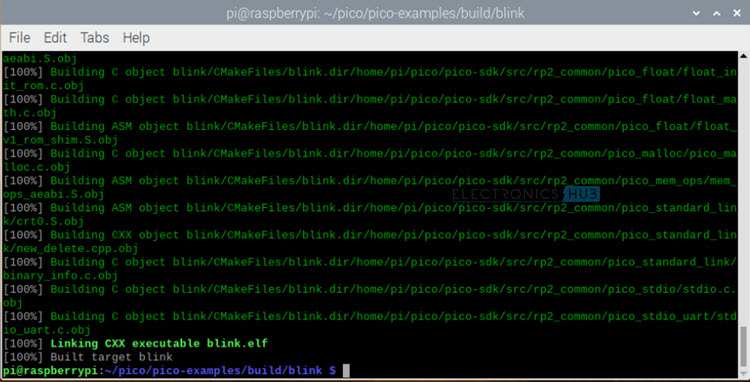 If you list out the contents of the ‘blink’ directory in the ‘build’ directory, you can see the list of generated files. 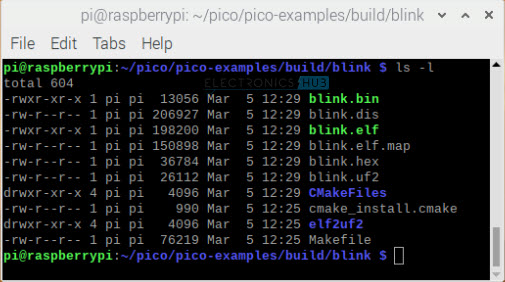 Of all these files, we are interested in the ‘.uf2’ file named ‘blink.uf2’. If you remember the MicroPython tutorial, this is file format of the MicroPython binary which can be easily uploaded in to Raspberry Pi Pico simply by dragging and dropping (after setting the Pico in bootloader mode).

Load the Blink and Run it

The simplest way to upload the program to Raspberry Pi Pico is to put it in Bootloader mode, which will mount the Pico as an USB Mass Storage Device. Then we can simply drag-and-drop the blink.uf2 file. 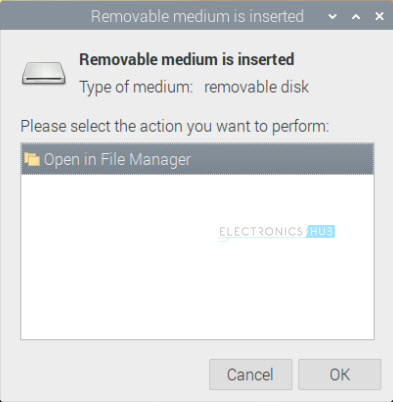 Open the file manages, browse to the pico/pico-examples/build/blink directory. Simply drag and drop the ‘blink.uf2’ file onto Pico. The Pico will reset (and gets disconnected from the computer) and the LED starts blinking. 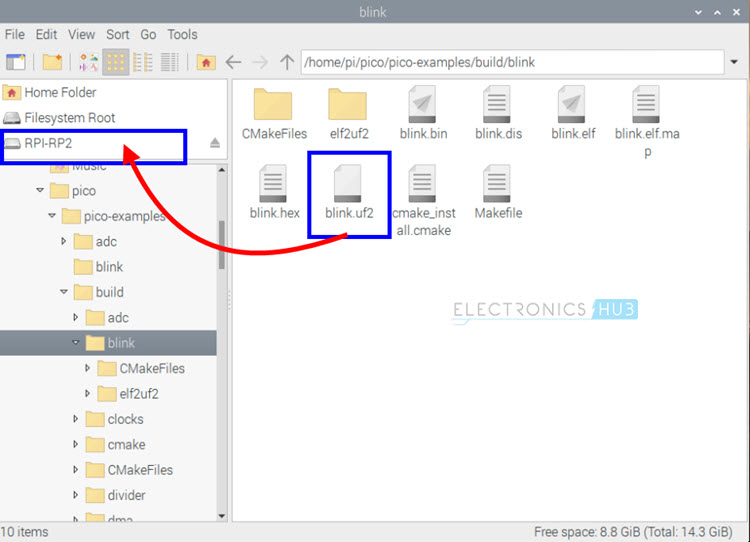 Are you tired of unplugging and plugging the Raspberry Pi Pico to put into bootloader mode? Then I will show you a work around so that you don’t have to do that every time you want upload a program to Pico.

What we are actually doing when unplugging and plugging Pico is resetting it. So, if we can find another way to reset Pico, then we can keep the Pico plugged in to the computer. As it turns out, there is rather a simple way to reset Pico. 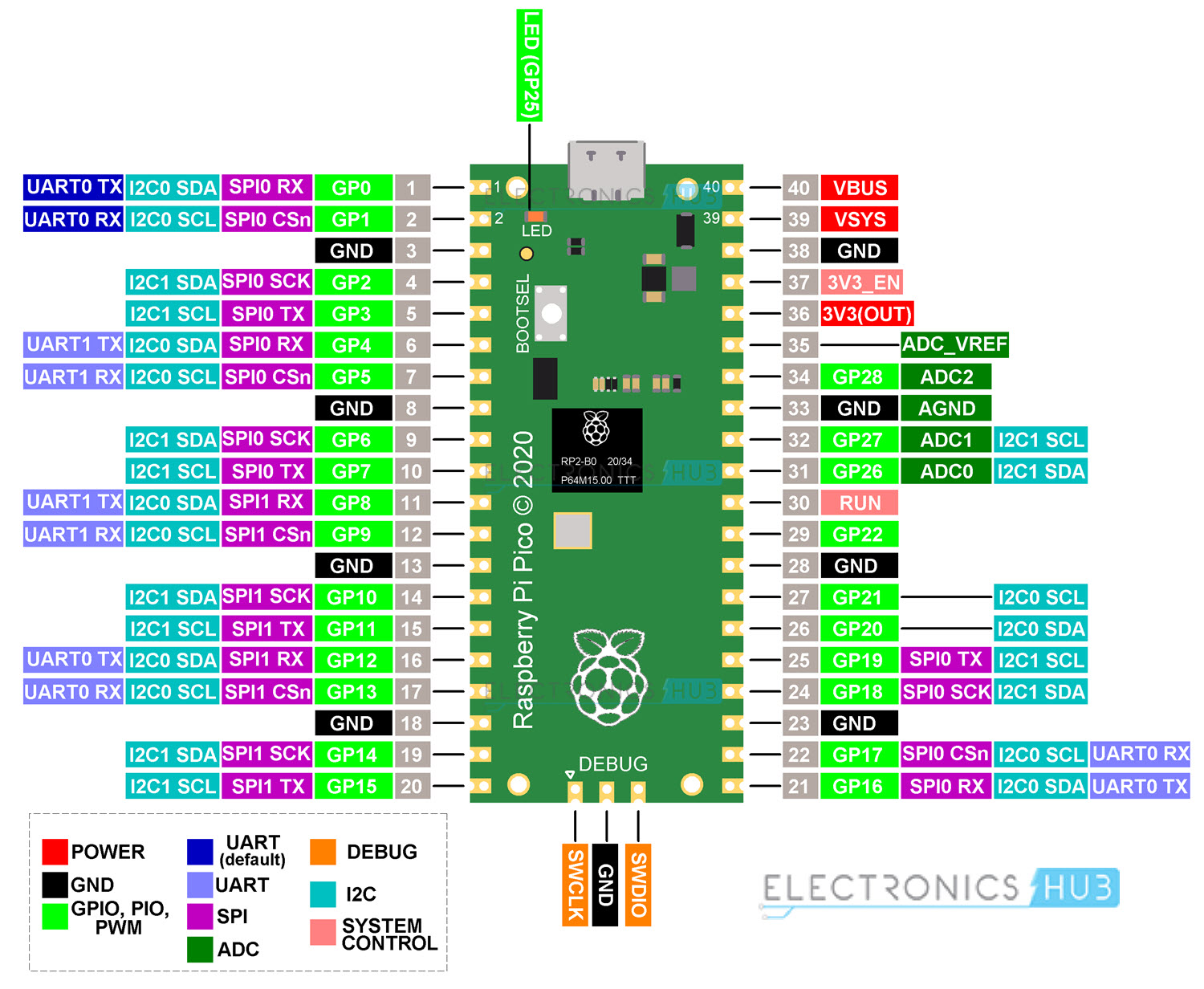 This is actually the global reset pin of RP2040 Microcontroller. When this pin is pulled LOW, the RP2040 microcontroller will reset.

So, I connected a push button between RUN pin and GND. Whenever I push the button, it will reset the microcontroller. Let us call this button as Reset Button. 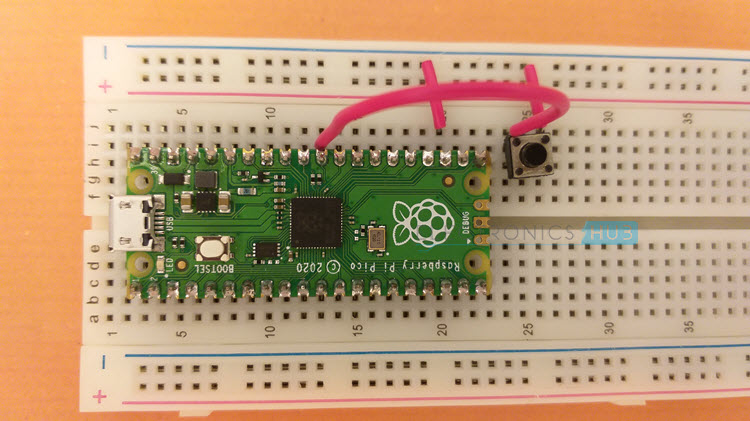 That’s it. Your Pico is now in Bootloader Mode. You can keep the USB cable connected to Pico and the host computer (Raspberry Pi) but you can easily reset or select bootloader mode.

If you just want to reset the Pico, simply push the Reset Button once and release it.

A complete beginner’s guide to Getting Started with C SDK for Pico. You learned how to Program Raspberry Pi Pico using C Programming Language by understanding how to download the Pico C SDK, install all the necessary tools, build the source code and upload the binary to Raspberry Pi Pico.

For All Mankind Season 2 Episode 3 Review: Rules of Engagement