Ethernet and WIFI are two popular terms that every person who uses the internet would have heard about. Some people think of Ethernet and WIFI as the same thing. But that’s not true. One of these is recent, while the other one is being used for many decades.

So if you want to differentiate between Ethernet and WIFI, this is the best place. You’ll also be able to decide which one’s best for you and why. So, if you’re curious, let’s begin. 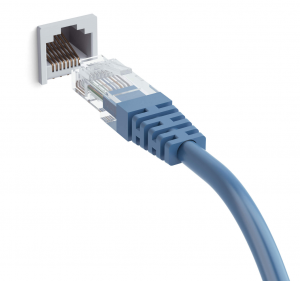 Ethernet is a system of connecting devices in a Local Area Network. It consists of a crossover cable, router, ethernet cable, and hub. Using Ethernet, you can transmit the data over a network of devices. Basically, it’s a wired system of networks.

WIFI stands for Wireless Fidelity. Using WIFI, you can connect different devices without using a wired connection. WIFI came into existence in 1999 and is the most commonly used type of connection.

Below is a comparison table for your reference: –

Initially, WIFI came with the 802.11 g standard support. It promised speeds of up to 54MBps and you could connect phones with such a connection. However, the speed was quite low as compared to the Ethernet connections, which offered speeds ranging from anywhere between 100-1000Mbps.

Ethernet cables have a clear advantage over Wireless connections. With Cat 8 Ethernet cables, you can get speeds of tip to 40Gbps. However, the latest WII 6 standard supports a speed of just 9.6Gbps which stands nowhere near the ethernet connections.

You can achieve such speeds on WIFI connections only if you buy expensive WIFI routers. In a nutshell, in terms of speed, WIFI barely survives the competition against the Ethernet connection. So, if you’re a fan of speed or need connection for professional purposes, you should prefer an Ethernet connection.

Now, you should know that the above-mentioned speeds are theoretical. The reality is different. With ethernet connections, you can expect consistent speed even when the weather outside is pretty bad. You can experience this consistency in speed if you download large files. With Ethernet connections, streaming high dentition videos is also a fun and smooth experience.

But when it comes to WIFI, the story is not pleasant. If there’s rain, or worse, storms outside, you may face interference in the signal strength. This will affect both the data transfer speed and the browsing experience. Also, you’ll experience sporadic signal strength when you move away from the router.

The sporadic signalling can be fixed if you place the router in the Centre of your house or office. However, you still cannot achieve the consistency offered by the Ethernet connection.

So, if you have a small house or office, WIFI can work well. However, if you have a large office with multiple users who need consistent speed, an Ethernet connection is what you should prefer.

Security is an important factor to consider here. Ethernet connections are accessed by the devices which are physically connected to the network by wires. So, the chance of data leakage or security breach is minimized. Also, you need not apply any encryption to add to the safety of your data. You can use a firewall that will refine everything before it reaches you.

WIFI is not as safe as the Ethernet connection because it is an open network. Anyone with a smartphone or laptop can see the network and access multiple devices connected with a particular WIFI connection. It means the data is not safe when you’re using the WIFI.

The data has to be encrypted when it comes to WIFI. The most secure encryption type is WPA2-PSK, while the weakest one is WEP. Most of the time, home WIFIs are secure. And the WIFI connections at public places like cafes, parks, restaurants are the most insecure and prone to attacks.

Latency is another important factor that you should consider. You can think of latency as the delay or time taken for the traffic to travel from a device to the destination. Online gamers also call it ping, which plays an important role while playing online multiplayer games.

Ethernet connections offer low latency. It means whenever you process something,  the response time is less and immediate. And this is crucial if you play online multiplayer games or attend online meetings.

WIFI, on the other hand, offers high latency as compared to ethernet connections. So, if you want a quick response and low latency, go for an Ethernet connection. Otherwise, you can go for a WIFI network.

Interference, in terms of connection, means anything which interrupts the regular flow of data from the source to destination. While using wireless connections, you might have experienced low speeds, dropped signals, and latency. This happens due to the interference caused by various electronic devices or appliances that we use at home or offices.

It happens only in the case of WIFI connections. When it comes to Ethernet connections. There’s usually no interference. It is because of the hardwired system of cable through which the data flows.

It’s the prime reason why people prefer WIFI connections. Most people these days use smartphones for gaming and entertainment purposes. And for this, they prefer a mobile network or WIFI connection. It’s because it prevents you from connecting a cable to your device, which eliminates the portable nature.

Ethernet connections, as you may know, require a wired connection. And it’s the reason why ethernet connections are mostly used in offices where you don’t have to relocate frequently. So, in terms of portable nature, WIFI wins the race.

Which Connection to Choose?

Here’s what you should choose: –

These days, wireless routers come with ethernet ports. So, you can use it for various different purposes without issues.

WIFI and Ethernet connections have their ups and downs. However, before choosing one, you should consider the factors like latency, speed, interference, and portable nature. These days people commonly use WIFI because it is easy to install use and offers portability.

However, the ethernet connections offer some major advantages, which are not available with WIFI connections. So, before making a choice, list your requirements and choose accordingly. This way you’ll be able to make the right choice.

Why You Should be Watching Adult Swim's Birdgirl