Almost 90% of the electrical energy we use in our day-to-day life is from alternating source. Be it our home appliances, office equipment or industrial machines, we use AC source to power these devices.

If you are a beginner, then Alternating Current or simply AC is a type of electric power in which the electric current changes periodically, both in magnitude and direction. Further, depending on the application, AC Power can be delivered in either a Single Phase or a Three Phase system.

A Single Phase AC Power system consists of two wires known as the phase (or sometimes a Line or Live or Hot) and the neutral wire. In case a three phase system, you use either three wires or four wires for transmitting power (no neutral in three wire three phase power and all the three wires are phases).

What is Single Phase Power Supply?

As mentioned earlier, in a Single Phase Power Supply, the power is distributed using only two wires called Phase and neutral. Since AC Power takes the shape of a sinusoidal wave, the voltage in a single phase supply peaks at 900 during the positive cycle and again at 2700 during the negative cycle. 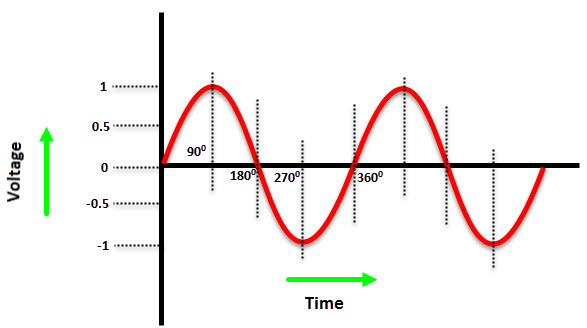 The phase wire carries the current to the load and the neutral wire provides the return path of the current. Usually, the single phase voltage is 230V and the frequency is 50Hz (this depends on where you live).

Since the voltage in a single phase supply rises and falls (peaks and dips), a constant power cannot be delivered to the load.

What is Three Phase Power Supply?

A Three Phase Power Supply consists of three power wires (or the three phases). Additionally, depending on the type of the circuit (which there are two types: Star and Delta), you might or might not have a neutral wire. In a three phase power supply system, each AC Power Signal is 1200 out of phase with each other. 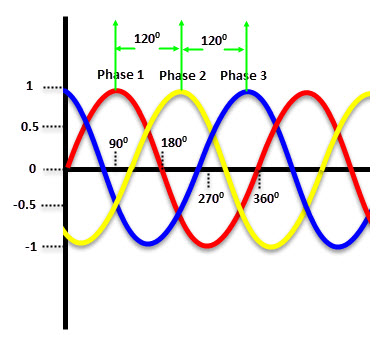 In a three phase power supply, during one cycle of 3600, each phase would have peaked in voltage twice. Also, the power never drops to zero. This steady stream of power and ability to handle higher loads makes a three phase supply suitable for industrial and commercial operations.

As mentioned earlier, there are two types of circuit configurations in a three phase power supply. They are the Delta and the Star (Y or Wye). In Delta configuration, there is no neutral wire and all the high voltage systems use this configuration. 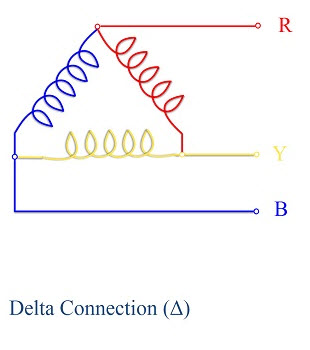 Coming to a star or wye configuration, there is a neutral wire (the common terminal/point of the star circuit) and a ground wire (sometimes). 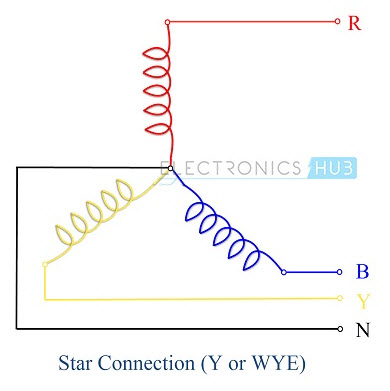 The voltage between two phases in a three phase power supply is 415V while that between a phase and the neutral is 240V. Hence, you can provide three single phase supplies using a three phase supply (this is how it is normally done for residential and small business loads).

Let us now take a look at the difference between single phase and three phase power supplies.

Let us now see the comparison of Single Phase and Three Phase Power Supply Systems in a table.

Do You need a Three-Phase Power Supply?

But if you have a large home with three to four air conditioning units (all might run at a same time), water heaters, big submersible pump, washing machine, double-door refrigerator etc., then you might need a three-phase supply so that load on each phase is distributed properly.

Since we don’t have direct three-phase devices, what the power distribution company does is that the three-phases from the three-phase supply are given as three separate single phase supplies. For example, if you have three bedrooms with three ACs, then each room will be provided with a different phase.

It is common for apartments and communities to have dedicated transformers so that they can step down 11kV which comes directly from the substation to 240V without depending on the street transformer.