Basics of Sample and Hold Circuit


In this tutorial, we will learn about Sample and Hold Circuits. They are a critical part of Analog to Digital Converters and help in accurate conversion of analog signals to digital signals. We will see a simple sample and hold circuit, its working, different types of circuit implementations and some of the important performance parameters.

A Sample and Hold Circuit, sometimes represented as S/H Circuit or S & H Circuit, is usually used with an Analog to Digital Converter to sample the input analog signal and hold the sampled signal, hence the name ‘Sample and Hold’.

In the S/H Circuit, the analog signal is sampled for a short interval of time, usually in the range of 10µS to 1µS. After this, the sampled value is hold until the arrival of next input signal to be sampled. The duration for holding the sample will be usually between few milliseconds to few seconds.

The following image shows a simple block diagram of a typical Sample and Hold Circuit.

Need for Sample and Hold Circuits

The following image shows the input and output of a typical Sample and Hold Circuit. 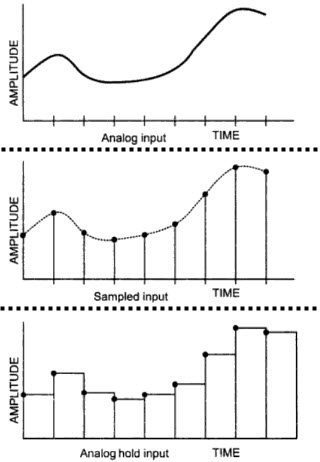 Let us understand the operating principle of a S/H Circuit with the help of a simplified circuit diagram. This sample and hold circuit consist of two basic components:

This circuit tracks the input analog signal until the sample command is changed to hold command. After the hold command, the capacitor holds the analog voltage during the analog to digital conversion.

Any FET like JFET or MOSFET can be used as an Analog Switch. In this discussion, we will concentrate on JFET. The Gate-Source voltage VGS is responsible for switching the JFET.

Types of Sample and Hold Circuits

Let us now see a few different types of Sample and Hold circuits. Note that all the below mentioned circuits use JFET as the switch. During the sampling period, the JFET is turned ON and the charging in the holding capacitor rises to the level of the input analog voltage.

Keeping this in mind, let us take a look at the first S/H Circuit. The following image shows an open-loop type S/H Circuit.

As there is no feedback, this circuit is relatively faster than the coming circuits (which all are in closed-loop configuration). But the feedback in the closed-loop architectures provide higher accuracy figures. The acquisition time (discussed in the next section) must be as low as possible. It is dependent on three factors:

A slightly improved circuit than the first one is presented in the next circuit. In this configuration, the ON Resistance of the JFET is brought into the feedback loop and hence, the acquisition time is dependent on the other two factors.

The next circuit is further improved when compared to the previous circuit by providing voltage gain. The voltage gain of the circuit can be calculated using the input resistor R1 and the feedback resistor RF as follows:

The final circuit offers additional advantages than the previous circuit. The important one is that the position of the holding capacitor is changed and as a result, the voltage at non-inverting terminal of A2 is equal to the voltage across the capacitor divided by the open-loop gain of A2.

This ensure a faster charging time of the holding capacitor and subsequently a shorter acquisition time.

The performance of an S/H Circuit can be characterized by parameters that are commonly used for an amplifier like Input Offset Voltage, Gain Error, Non-linearity and so on. But there are a few characteristics that are specific to the S/H Circuits. 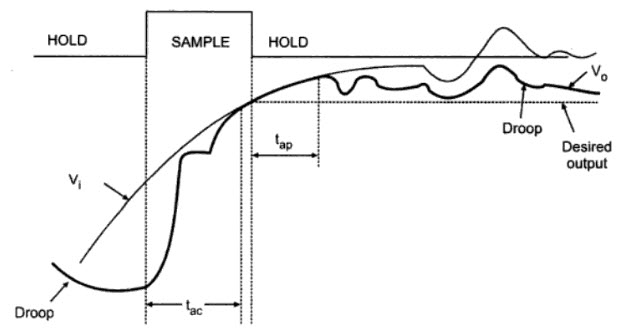 The time required for the charge in the holding capacitor to rise up to a level that is close to the input voltage during the sampling is called acquisition time. It is affected by three factors:

The time delay between the initiation of Vo tracking the Vi and the initiation of the hold command is called the Aperture Time. This delay is usually due to the propagation delays through the driver and the switch circuits.

For a precise timing operation, the hold command must be initiated in advance by an amount of aperture time.

The Aperture time will not be the same for all the sample and will vary from sample to sample. This uncertainty is called Aperture Uncertainty. This will severely affect the advancing of the hold command.

The hold mode settling time is the time taken by the output Vo to settle within the specified error band (usually 1%, 0.1% or 0.01%) after the application of hold command.

During the switching from sample mode to hold mode, there might an unwanted transfer of charge between the switch and the holding capacitor (mainly due to the parasitic capacitances). This will affect the capacitor voltage as well as the output voltage. This change in the output voltage from the desired voltage is called Hold Step.

Again, the parasitic capacitances in the switch may cause AC coupling between Vo and Vi in hold mode. As a result, the output voltage may vary with changes in the input voltage and this is referred to as feedthrough.

Voltage Droop is a phenomenon where the voltage across the holding capacitor drops down due to leakage currents.

Applications of Sample and Hold Circuit

Some of the important applications are mentioned below:

A complete beginner’s tutorial on Sample and Hold Circuit. You learned the importance of a sample and hold circuit in Analog to Digital Converters, a simple S/H Circuit using a MOSFET and a Capacitor, different types of Sample and Hold circuits, some important parameters which determine the performance of an S/H circuit and also the applications of S&H Circuits.

How To Reduce the File Size of PDF

How to Fix a Blank White Screen in Windows