I already discussed the Arduino UNO Pinout and Arduino Nano Pinout in the previous tutorials. If you are interested in those boards, then check out the tutorials.

Since the introduction of Arduino UNO as a quick prototyping board, there has always been a demand for more features than what Arduino UNO can offer. The answer to this is the Arduino Mega Board.

While Arduino Nano is a breadboard friendly version of Arduino UNO with more or less the same features, Arduino Mega is completely a different board. It can be considered as a big brother to both UNO and Nano, both in terms of size as well as features.

Arduino Mega is based on ATmega2560 Microcontroller, an 8-bit AVR Architecture based MCU from ATMEL. It is available in a 100-pin Quad Flat Package.

It is designed and developed to provide more number of IO lines (both Digital and Analog), more flash memory and more RAM when compared to UNO.

So, if you are developing some advanced robotic projects or 3D Printing hardware and want to use the Arduino environment, then Arduino Mega 2560 is the board for you.

The following image shows the layout of a typical Arduino Mega board. Unlike Arduino Nano, all the components are placed on the top side of the PCB. 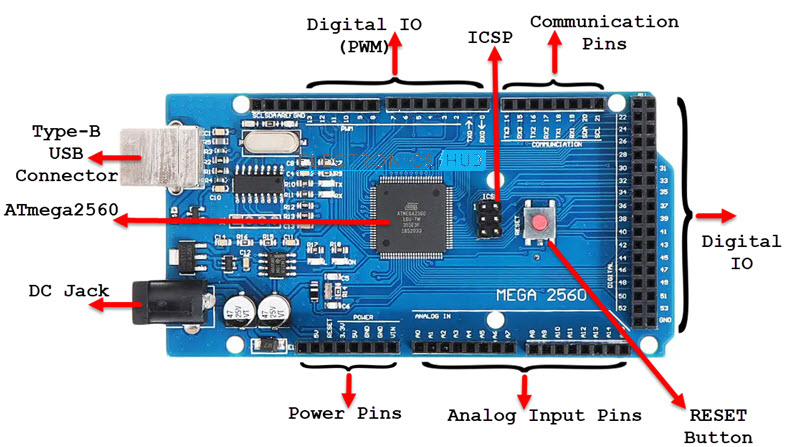 Layout of Arduino Mega Board

As you can notice, there is a Type-B USB connector on the left short edge of the board, which is used for powering on the board as well as programming the Microcontroller. There is also a 2.1 mm DC jack to provide external power supply. Apart from that, the layout of Arduino Mega is very much self-explanatory.

How to power up the Arduino Mega?

There are a couple of ways in which you can power the Mega board. The first and easy way is using the Type-B USB Connector. The next way is to provide an unregulated supply in the range of 6V to 20V to VIN pin of the Mega.

You can also supply the unregulated supply through the 2.1mm DC Jack, in which case, you can access the supplied voltage through the VIN Pin.

What are Different Memories of Arduino Mega?

Strictly speaking, this is specific to the MCU i.e., ATmega2560, used on the Arduino Mega Board. There are three different memories available in ATmega2560. They are:

What are the Input and Output Pins of Arduino Mega?

Of the 86 pins available on the Mega board, 72 pins are associated with input and output. In that 54 pins (D0 to D53) are true digital IO pins, which can be configured as per you application using pinMode(), digitalWrite() and digitalRead() functions.

There are also 16 Analog Input Pins (A0 to A15). All the analog input pins provide a 10-bit resolution ADC feature, which can be read using analogRead() function.

An important point about Analog Input pins is that they can be configured as Digital IO pins, if required.

Arduino Mega supports four hardware Serial Communication interfaces. Digital IO pins 0 and 1 are used as Serial RX0 and TX0 pins to receive and transmit serial data. These pins are connected to the serial pins of the on-board USB to Serial Converter IC.

The final communication interface is the SPI. Digital IO Pins 50, 51 52 and 53 can be configured as SPI pins MISO, MOSI, SCK and SS respectively.

Using the IOREF pin, you can set the reference voltage for Microcontroller operations.

Although you can program the Arduino Mega using the USB cable, there is a provision to program the MCU using the In-Circuit Serial Programming (ICSP) interface.

The UART bootloader, which is preloaded in to the ATmega2560 Microcontroller, enables programming through serial interface. But ICSP doesn’t need any bootloader. You can program Arduino Mega using ISCP or use the ISCP of Arduino Mega to program other Arduino Boards.

Digital IO Pins 2, 3, 18, 19, 20 and 21 can be configured as External Interrupts Pins INT0, INT1, INT5, INT4, INT3 and INT2 respectively. Use attachInterrupt() function to configure the Interrupt for rising edge, falling edge or level change on the pin.

If you want use any Shields, then Arduino Mega is perfectly compatible with most of shields designed for Arduino UNO.

Now that we have seen a little bit about Arduino Mega and its important features and specifications, let us dive into the Arduino Mega Pinout. The following image shows the complete pinout of Arduino Mega Board. 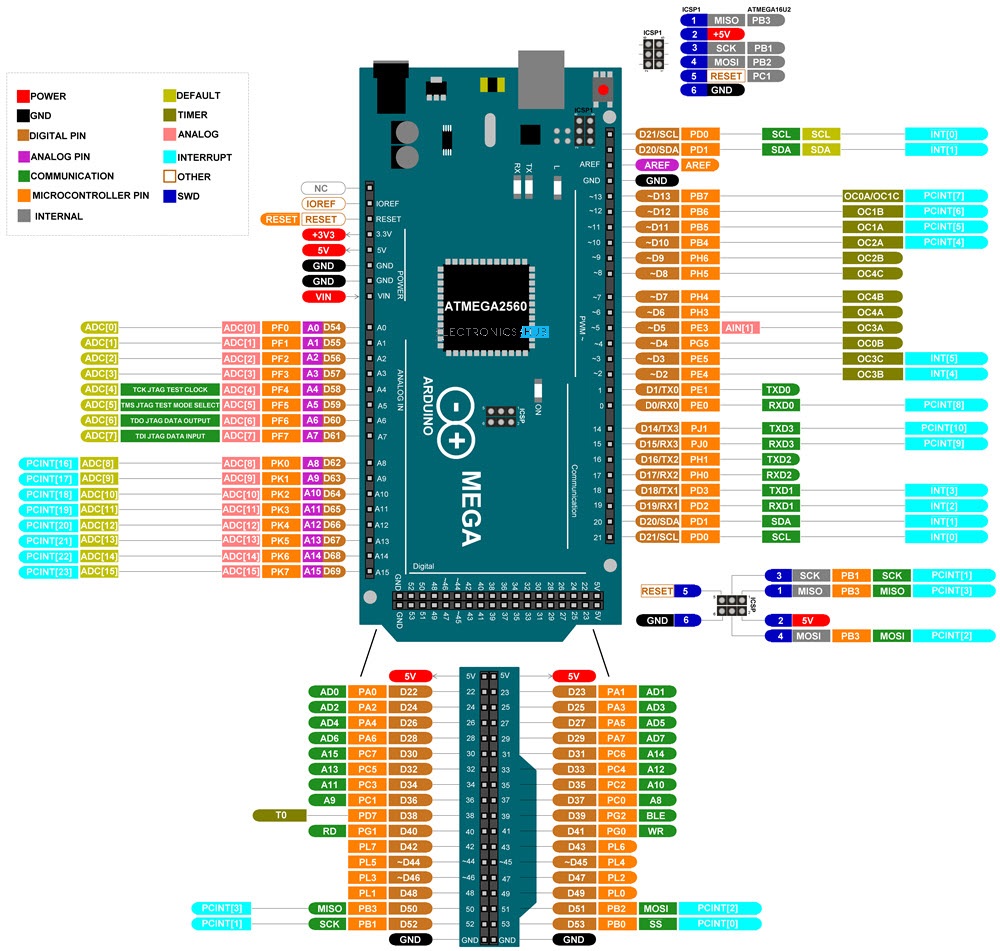 As you can see from the image, I described each pin of the Arduino Mega with its Microcontroller equivalent pin, alternative functions, default functionality and other additional features.

This was a brief overview on Arduino Mega board layout, technical specifications, important features and most importantly the complete Arduino Mega Pinout information.

TV Ratings: The Resident Takes a Hit, NCIS Returns Up