NAS stands for network-attached storage which is one of the best devices that you can get if you wish to have a high-capacity storage device that can be accessed from multiple devices at once. Although, even if you have already bought a NAS, you will still need to get drives for installing in it. So, some of the best NAS hard drives have been stated down below which offer these features: 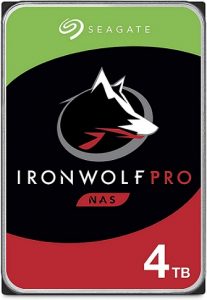 Seagate is one of the most popular brands out there when it comes to hard drives since it makes both consumer-grade as well as high-performance NAS hard drives like the one stated here.

The Seagate IronWolf Pro ST4000NE001 NAS hard drive comes at the 1st position of this list since it is the most reliable option present here. Apart from being an excellent hard drive for long-term usage, you get a capacity of 4 TB in this hard drive. This is combined along with a cache of 128 MB which is quite good for the performance numbers offered by it.

Being a fairly premium hard drive, it happens to be rated at 7200 RPM for excellent performance. To be precise, you get up to 214 MB/s transfer speeds from this NAS hard drive which is quite high. But the best thing about this NAS hard drive is that it is highly reliable thanks to its 300 TB/yr workload rating as well as a 5-year warranty. If your hard drive still fails, you will be glad to know that it also has a 3-year data recovery service. 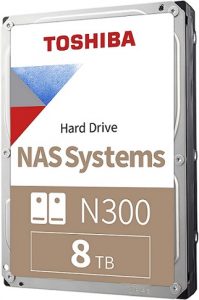 While Toshiba might not be as popular as other consumer-grade brands of hard drives, it is one of the most used options for enterprise solutions thanks to its wide range of high-end NAS hard drives.

Toshiba’s N300 HDWG180XZSTA NAS hard drive comes at the 2nd position of this listicle as it offers a great value for money. This is due to the reason that it has a very high capacity of 8 TB which is quite high for the given price. You also get 256 MB of cache inside this NAS hard drive which is fairly higher than most other options in its class.

Since this hard drive is made for enterprise solutions, it uses a 7200 RPM speed rating. Because of this, you can get excellent speeds of up to 260 MB/s for quickly transferring large-sized files. Although, in comparison to other high-end options, this value-for-money Toshiba NAS hard drive has an average 180 TB/yr workload rating and a 3-year warranty which can be a bit limited for some users. 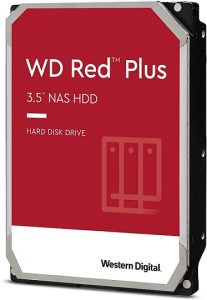 Western Digital can be another great option if you are looking for highly reliable hard drives meant to go inside your network-attached storage for all of your bulk storage needs.

This Western Digital WD10EFRX NAS hard drive comes at the 3rd position of this article because thanks to the fact that it is the cheapest NAS hard drive stated here, it makes for a great pick for buyers on a tight budget. To offer such a low price tag, this NAS hard drive has a limited capacity of just 1 TB. Similarly, its cache is also rated for 64 MB in total capacity which is quite lower than others

As you would expect from such an affordable NAS hard drive, its maximum spinning speed tops out at 5400 RPM. Due to this, its maximum transfer speeds are generally around the 150 MB/s mark. Fortunately, since this is also a NAS hard drive, it is fairly reliable with a 180 TB/yr workload rating along with a 3-year warranty for peace of mind. 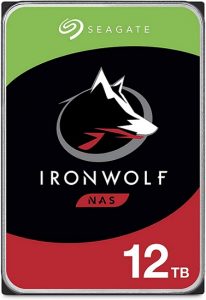 Seagate also makes value for money NAS hard drives that are meant to be used in scenarios where you have to store a vast amount of data in your network-attached storage.

The Seagate IronWolf Pro ST12000VN0008 NAS hard drive offers the highest storage capacity in comparison with other options present here making it the best choice for storing large amounts of data. To be precise, you will get a capacity of 12 TB with this NAS hard drive. Other than having a very high capacity, it also has a high cache of 256 MB which is always great to have for proper performance out of your NAS hard drive.

Similar to most other high-end NAS hard drives this one is also rated at 7200 RPM in terms of its spinning speeds. As a result, it is able to offer transfer speeds of up to 210 MB/s which should be ample for most users. Unfortunately, to offer such a high capacity with the given performance numbers, Seagate had to cut corners in terms of its workload rating which is given at just 180 TB/yr along with a 3-year warranty which is slightly lower than the previous Seagate discussed earlier. 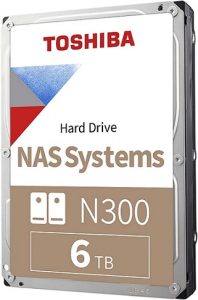 We have yet another NAS hard drive from Toshiba here in this article which is quite similar to the previous one in many ways except for its storage capacity.

Toshiba’s N300 HDWN160XZSTA NAS hard drive can be another great option if you want to get something that offers a great value for money to the user. This is primarily possible thanks to its given price despite having a capacity of 6 TB in total. Similar to most other NAS hard drives of similar price and capacity, this one also has a 128 MB cache.

Because this NAS hard drive has a speed rating of 7200 RPM, its performance numbers are fairly great. You can get transfer speeds of up to 260 MB/s from this NAS hard drive making it one of the best performing options out there. Moving over to its reliability, this NAS hard drive is also rated at 180 TB/yr workload rating along with a 3 year long which is on par with other options in its class. 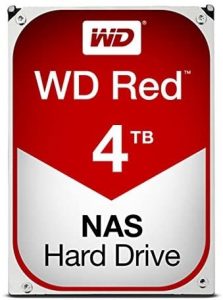 Western Digital also makes higher capacity NAS hard drives that can be practical to use in scenarios where you would want to store a decent amount of data without paying a premium for the same.

Not only that but the spinning speeds of this NAS hard drive are also rated at just 5400 RPM. Due to this, its transfer speeds are quite limited at a maximum of 150 MB/s because of which this NAS hard drive cannot be used for enterprise usage. Thankfully, because this is a NAS hard drive, you still get a workload rating of 180 TB/yr as well as a 3-year warranty with it.

Whether you want a storage device with high capacity or you simply want storage drives that are shareable over network for easy access, getting a NAS, in either case, can be a great idea. A NAS can be handy at your home as well as your office thanks to its versatility.

Starting with one of the most important factors to consider before buying any kind of hard drive is the capacity offered by it. As you would expect, a higher-capacity hard drive allows you to store a lot of data with ease. This becomes even more important to consider if you are getting hard drives for a NAS since you are most likely going to want a high-capacity one. Due to this, you can find NAS hard drives in all sorts of capacities like 4 TB, 6 TB, 8 TB, and even 12 TB in some cases.

As you would know, all hard drives including the NAS hard drives present above are mechanical drives. This means that they have a spinning platter inside them that stores all of your data. Because of this, it is quite important to check the speed of this platter which can be given as the RPM rating of your hard drive. While buying a NAS hard drive, you can primarily find 5400 RPM and 7200 RPM speed options. Out of these two, the latter speed of 7200 RPM is the better one since it will most likely offer higher transfer speeds.

Even though you can check the RPM speeds of your hard drive and its total cache capacity to get an idea of its performance, these things still don’t tell you about the real-life performance numbers. Therefore, you should also check the transfer speeds offered by your NAS hard drive. Generally, hard drives offer transfer speeds ranging from 150 MB/s to 200 MB/s depending on the model that you are getting. If you are going to transfer a lot of large files to and from your NAS, then it is always ideal to get a hard drive with high transfer speeds.

Those of you who are going to set up a network-attached storage are most likely going to use a few extra drives for redundancy to ensure that you do not lose your data in the event of a drive failure. But even then, it is still highly recommended to go with NAS hard drives that are highly reliable.

One great way to ensure this is to check the workload rating which is given in TB/year and tells you the amount of data you can write to a drive in a year. Even though most NAS hard drives offer a decent workload rating of 180 TB/year, there are also more reliable options with up to 300 TB/year of workload rating. Such drives with high workload ratings are generally great for NAS devices that are going to be used a lot.

If you are getting a NAS or a network-attached storage device, then you have to make sure that you are not using standard hard drives since they are simply not reliable enough. Instead, you need to get a high-performance drive that are reliable enough to be used in a NAS which is meant to run 24 * 7 for a long time.

How To Check PC Temperature